How to Get a Better Price 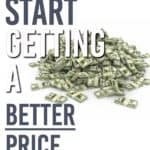 I love a good deal. I’m from Winnipeg, a place where you don’t brag about what you bought. You brag about the deal you made.

The actual product you get is a distant second to deal that you got from asking for a better price.
Some people love the thrill of the sale. Chasing down a good money saving deal.
Not me
Don’t get me wrong I love a good deal. I love to save money on my purchases. It’s the asking for a better price that’s always given me problems.
It’s the hassle of going through all the motions of the deal. The asking for a better price, then the waiting, and the holding out and asking again (and again and again).
Getting a better deal often feels like a hassle. Something I don’t have time for most days.
You get it right? You get busy and the last thing you need/want to do is waste your time finding out if you can get a better deal. 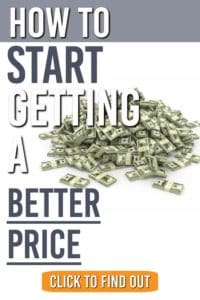 The asking for a better price is more about rejection. It’s being flat out told: “No”. Then that awkwardness of standing there and feeling like I have failed in some strange way.
I realized now that I needed to get around it. So like anything I do, I started out awful and started to work on being better at it.
How to Get Around Asking For a Better Price

Flash forward a few months and it’s a lot easier the more you do it. From Satellite radio, to car discounts, and even on my groceries. I’ve come a long way in asking for a better price this past year. It has saved me hundreds and more likely thousands!
Here’s what I did to change my thoughts on getting a deal, and getting past the asking point as I like to call it:

If you think about it, if you ask for a discount or a lower price and are get told “No”, what has happened?

You are in the exact same spot as you were before. Except now you know you have the best price. Or at least best price you feel you could get. Plus the clerk you are asking doesn’t care. They go through this 20 times a day. They have forgotten about it the minute you walk out.

It’s what you tell yourself after you ask and don’t get a discount that’s far more important. Any of these sound familiar?
“I’m so stupid, I can’t believe I asked.”
“I’m so embarrassed right now”
“Looks like I am never coming back to this place again”
These are all made up things we tell ourselves. They aren’t true, but they do hold you back.

Here’s what I do now:

I ask – I still have a lot of mental talk trying to prevent me from doing this it gets easier every time.
I ask if there is anyone else that could give me a discount like the owner or manager
If I get some type of discount I celebrate, if not I tell myself: “Nothing gained nothing lost” and I move on.
No negative self talk. It’s over. Move on.

If You Don’t Start Asking for a Better Price, You Won’t Get It

This has been a hard lesson to learn, one that I’m trying to teach my kids. You don’t get anything in this life unless you ask for it.
People can’t give you what you want, unless they know what you want. You need to ask for what you want.
So ask, ask, ask!

It’s your duty to keep your money

My dad is a great ask-er (not too sure if that’s a word). Anywhere we go he will ask for a deal. I used to find it embarrassing. Now I get it.
It’s his money and he wants to keep as much of it as possible.
He’s knows that every dollar you don’t spend, is an extra dollar you can use for something else. That’s a big life lesson right there!

Make it a game, because it is

The more I ask for discounts, the more I see it as one big game. You might not know you are playing a game, but you are. Most people don’t know it’s a game, I didn’t.
The name of the game is: “The more you save, the more you win”. Most people don’t know they are playing, or that they are allowed to play. You are in this game, start asking, get your wins!

The only thing holding you back is yourself. The doubt. The uncertainty. It all sinks in the pit of your stomach and holds you back.
Ask, don’t think about it. Ask. The more you do it the easier it will get.
Here’s What You Do The Next Time You Go Shopping
The next time you are buying something, when it’s appropriate get in the habit of asking for a better price.

What’s the best price I can get on this?
Can the manager give me a better price?
Can I get it for (insert your price here)?
That’s it!  Get in the habit of asking. The more you do the easier it gets. There are a ton of other tactics you can use. But for now get use to asking for a better price. The rest will come later on.
Make a point of asking once a day for a discount. Sure you will feel foolish, but you might save, and you will save.

If you aren’t into asking for a better price, I get it. But you should still save some money where you can.

Here are some apps I use for my online shopping to save extra money:

121 shares
This post may contain affiliate links which go towards keeping this site running. Please see our Disclaimer and Privacy Policy for more. We are a member in the Amazon Affiliate Program. Thank you for your support!