Behind the Screen Interview #9 – Vic from Dad is Cheap

I’ve got a zinger of an interview for you this week. Vic from Dad is Cheap started a blog a year ago and in the last few months we’ve become buddies. We share a lot of similar attitudes on money, travel and being a dad. I thin you will really like this interview so let’s get to it. When you are done make sure to head over to check out his site dadischeap.com

Let’s talk a little bit about who you are and where you are coming from. Tell me about your money journey? What got you started in learning about personal finance?

My name is Vic and I hail from Southern California. My money journey started when my daughter was born. While my wife and I weren’t horrible at finances, we just didn’t pay attention to our money. I realized that you don’t necessarily have to make a lot of money to live a wealthy life. You just have to have the mindset that you can accomplish your financial goals if you ACTUALLY HAVE GOALS. I always grew up with a very hakuna matata attitude about life – how everything will work itself out.

Once I had a kid, that mindset changed in an instant. Now everything is about making a better future for her. Being mindful of our finances will go a long way to helping her live a great life.

What would you say the biggest money obstacle has been for you to overcome?

I’d say the biggest money obstacle is being different from everyone else. It’s acceptable to be in debt, have huge car payments, and blow all your money on clothes, tech, and going out to eat a lot. It’s been a challenge as we’ve curbed a lot of our spending to achieve bigger financial goals. While people on the outside might think we’re misers who have no fun, I think the opposite. By being frugal and only spending money on what is important to us, it makes our experiences that much better.

How has overcoming that obstacle changed you?

It’s changed us for the better. We stopped worrying about what everyone else is doing and started focusing on ourselves. Dave Ramsey (who I know gets a lot of crap from the PF community) always says, “If you live like no one else, so later on you can live like no one else.” That to me means a paid off house, early retirement, and my daughter graduating college without a mountain of debt.

Are there any obstacles you are still working on ?

Paying off our mortgage. While most people consider a mortgage “good debt”, I would rather have no debt whatsoever. We live in a smallish place that some might consider a starter home. It’s not the biggest house (3 bed 1 bath) but we don’t intend to move anytime soon. At this point, it’s enough for our family.

We’ve been paying extra on the mortgage when we can and I’m looking into different ways to possibly accelerate the payoff. Stay tuned fellow readers!

There’s a moment in the Godfather 3 when Michael Corleone is trying to get out of the “Family Business”, and he says: “Every time I try to get out, they pull me back in.” What is one bad money habit you just can’t seem to shake?

Nothing. I’m awesome. Kidding. I think sometimes I tow the line between frugal and cheap where I’ll buy the inexpensive version only to have to replace it pretty quickly. I’ll always go for the store brand or the off brand and while most times they’re fine sometimes they’re crap. Don’t ever buy Kirkland running shoes. They’re ugly and it feels like you’re running on cardboard. 😉

If you were to start your money journey all over what would you do differently?

I’d save and invest more. I wish I opened a Roth IRA when I started working in high school. I also wouldn’t buy as many DVDs and video games. I had hundreds! I used to be a huge movie buff and spent all my money collecting DVDs. Who needs to see the movie Lost in Translation more than once?

What is your proudest money accomplishment?

I have a few (paying a car in cash, funding our daughter’s college, maximizing our IRAs), but I’d say the proudest money accomplishment is surviving unemployment while INCREASING our net worth.

Since we’re pretty frugal and have a decent emergency fund, we were able to easily live off of my wife’s income as well as unemployment. We didn’t really have to cut that much back and didn’t have to skimp on Christmas (I was unemployed Oct 2015 to Feb 2016). We even bought a car during our unemployment.

Being unemployed was one of the best times of my life. I got to spend whole days with my daughter and bond. I never would have gotten to experience that if I never lost my job.

I was pretty fortunate to land a job so quickly t hat I wasn’t desperate and took any job I could find. I took my time and picked the right situation.

Who is your money hero?

My wife. She has always inspired me to be a better person. She kept us afloat financially before I became Dad is Cheap. I used to get so annoyed when she nagged me to stop spending, now the shoe is on the other foot! She did a great job – we have a nice emergency fund and have a house because of her. If it wasn’t for her we would probably be in mountains of debt right now.

What was your worst money mistake?

My worst money mistake is that I didn’t save earlier in my IRA. I’d like to give a special shout out to my cousin Annabelle who helped me open a Roth IRA when I got my first job out of college. I just wish I put more into it. For the longest time I only put in $50 a month. If I maxed it out since the beginning I would have double what’s in that account right now.

What was your first money lesson?

I grew up spoiled, so I didn’t learn the value of a dollar until later in life. I always assumed that no matter what happens that my parents would take care of me so there was never that urgency in college to find a great career.

As I was about to graduate my dad had a brain aneurysm. We’re fortunate that he survived and is still alive and kicking (13 years later) but he was never the same. He can’t work anymore and needs someone to watch him most of the time.

That incident completely changed the trajectory of my life. I buckled down, graduated and looked for a job so that my parents wouldn’t have to support me anymore. While I didn’t make that much money in the early years, it was enough where I didn’t have to burden my parents asking them for money.

What money habits do you see in yourself (or others if you are perfect) that make you cringe?

Would you classify yourself as a Spender or a Saver?

Spender definitely. Since I handle the finances for the family, I pretty much do a majority of the spending for the family. I think the good thing about being on a good budget is that it ALLOWS you to spend. Most people think of budgets as restrictive, but to me it’s the opposite. We have a healthy fun budget that allows us to spend on stuff guilt free.

What’s the one personal finance book that had the biggest impact in your life?

Dave Ramsey’s The Total Money Makeover. It was the very first personal finance book that I read. Knowing what I know now I see that some of his stuff is crazy and radical – mostly the stuff about cash. I think a lot of people get turned off because he mixes in religion and angry old man speak in his book and radio show.  But at its core it’s all stuff that completely makes sense – spend less than you earn, debt is dumb, get on a budget.

Ok now for some non-money questions. Let’s get a glimpse of who Vic really is. 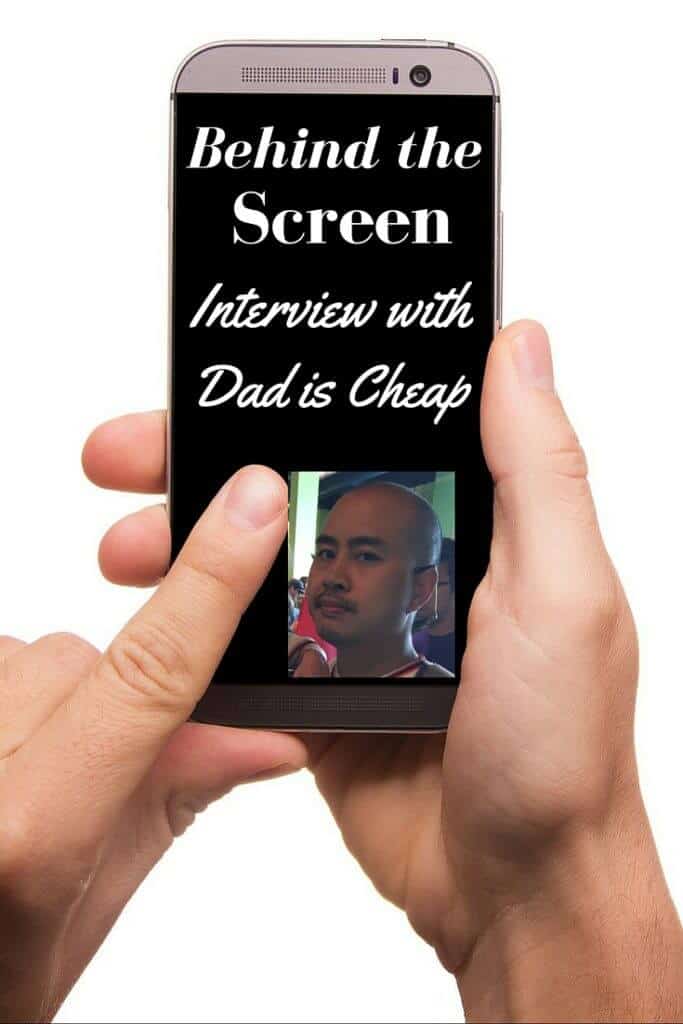 Did I mention pizza?

What is your favorite drink (alcohol or non-alcohol)?

I used to love White Russians (mixture of vodka, Kahlua, and half and half) but then I read somewhere that a cup is like 800 calories. I need to keep my beach body!

I’ll go with water. I drink gallons of it.

What kind of daily traditions or habits do you have?

My biggest daily habit is checking my YNAB and Personal Capital Accounts multiple times a day. It helps me keep track of our spending to make sure that we’re on the right track with our goals.

Which group do you fall into:

Apple of Samsung? Apple. I used to like being able to customize Android phones, but Apple just works.

Coffee or Tea? Coffee. Although I’ve been meaning to quit. Not so good on my stomach.

Night owl or morning bird? Both. I sleep late and wake up early. I’m a zombie.

I’m a huge music fan, what’s one (or more) of your favorite albums?

I grew up on 90’s hip hop. So I’ll go with some old Outkast – Sout southernplayalisticadillacmuzik and Enter the Wu-Tang. Let’s throw in Notorious BIGs Ready to Die and Tupac’s Me Against the World

What’s the one movie you could watch over and over again and never get tired of it?

I can always watch one of the old Star Wars movies (the prequels not so much). But I’d say my favorite movie that I’ll watch at least a few minutes if it comes up on TV is Shawshank Redemption.

What book are you reading right now?

I wish I had time to read! I used to be a big reader. I read all the Game of Thrones books before they came out. Now that the shows past the book I can’t be an uppity book nerd telling everyone what the shows missed from the books.

I’m trying to read Lewis Howe’s The School of Greatness.

Finish this sentence with the first thing that comes to mind

I would rather budget, than coupon.

Do you have a favorite quote?

Where can people find you online if they want to get ahold of you?

Such a great interview. make sure to head over to his site and say “Hi”. If you have any questions or comments let Vic and I know in the comments below.

5shares
This post may contain affiliate links which go towards keeping this site running. Please see our Disclaimer and Privacy Policy for more. We are a member in the Amazon Affiliate Program. Thank you for your support!