Have You Normalized Your Spending? 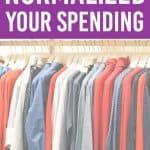 A few years ago I was visiting a childhood friend who had moved to Atlanta (btw Atlanta is one of my fave places to go). As we were driving back to his place the conversation turned to money.

“Remember when we would get our allowance, it was $5 and we felt like we had all the money in the world.” I said.

“Yeah,” he replied. “Then we got our first jobs and we felt like we were millionaires! All of a sudden we could afford all of these things we wanted. We didn’t have to worry about food or rent. It was all play money!”

“I know!!! It was awesome. We were only getting a small amount like $150 a check but you were able to make it go so far.”

There was a silence in the car as we drove. Thinking about those good days, in the background, a well timed Bryan Adams “Summer of 69” was playing:

“Oh and if I had a choice, yeah I’d always wanna be there. Those were the best days of my life”

“God what happened to us?” he said. “We used to make it work on a lot less money. Now we have more disposable income than we ever have had and yet it’s not enough. I mean, what the hell happened?”

I thought about it for awhile and said the only thing I could think of that made sense to me:

“We normalized our spending…”

Have You Normalized Your Spending?

When you think of your life and the new things that you learn to do, there is the pattern that comes up.

Second, you get familiar and adapt.

Third, you normalize, and it becomes second nature.

Like the music running in the background of a movie, you know it’s there setting the scene, but you don’t really pay attention to it. Because it’s just part of the background noise. You’ve grown accustomed to it.

Think for a second about driving a car.

The first time you get in you can’t even fathom taking your eyes off the road, or taking your hands off the 10 and 2 of the steering wheel.

After awhile you get a little bit more comfortable with driving.

It becomes more familiar, you aren’t as worried about what all the buttons do, you know which ones do what.

More importantly you know how to work things when you need to.

As your comfort level rises with driving, you take one hand off and play with the radio, or drink some of your coffee.

Then you normalize it.

All of a sudden you are talking over bluetooth, while you listen to the radio and drink a coffee all at the same time!!

If we had to consciously think about every little thing we did in a day we would go absolutely insane. From brushing our teeth to driving to work, we are constantly adapting and normalizing our repeated actions.

And we do it with our spending too.

How We Normalize Our Spending

Think about the first job you had, you went to work. Because you had literally no money in the beginning, you bring a bag lunch every day.

Then a couple of weeks go by, and you get paid.

Suddenly everyone in your area is going out for lunch on payday Friday.

Naturally you go with them.

The Next Thing You Know, Friday Lunches Out Are A Normal Thing.

Soon after that, you start buying your coffee on the way in to work in the morning.

Then another one around 10 to carry you through morning, and a third in the afternoon because you need a little pick me up around 2:30 to make it through until supper.

This is the cycle we all find ourselves in.

You can call it lifestyle creep but I don’t see it as that.

I see it as spending blocks. We add one and enjoy it (like a morning coffee).

Soon after we add another, then another.

None of these spending items are big on their own, but they add up. More importantly they are all part of your daily spending routine.

Soon you can’t imagine starting your day without your morning coffee and breakfast sandwich (you added the sandwich a few months back when you realized it was easier to get breakfast at the same time).

Then what seems like suddenly, when it’s really not, the job you started to go to for money is costing you $20-$50 a day extra just to get through.

It’s not your works fault, and you didn’t start out that way. It just kinda happened.

When I speak to people about their spending habits, there are two topics. The big expenses and the small expenses.

It’s important to keep the big expenses in mind. Saving thousands on your mortgage over 20 years of payments is important.

But the little spending is where I see more damage.

Because you don’t think about it.

It’s the bleeding to death by a thousand tiny cuts that is more damaging to your finances.  Because you aren’t aware of them.

Thinking back to our days of our first allowance and our first jobs, I realized that I didn’t need much then.

Which begs me to ask the question:

Why do I need so much now?

What has changed? Why was I happy with a movie once a month, now I can’t seem to get enough entertainment?

Why am I insistent on grabbing a coffee from the drive through, every time I pass a coffee shop on my way down Main Street?

When did that happen?

Over time we build up theses little spending habits, none of them are big on their own, but they all add up. We have the little cues that tune us into these purchases and like that soundtrack in the background we are just doing what we do without giving it much thought.

How we denormalize? Un-normlaize? Re-normalize?

There’s really only one way that I know of to re-normalize.

Go back to the beginning and change the habit.

So instead of pulling in for a drive-through coffee, recognize that you are doing it and replace it with something that doesn’t cost you money. Like packing water or bringing coffee from home.

After a few weeks of changing this one habit you will find that you aren’t nearly as drawn to these little money sucks as you once were. Soon enough you will break that habit.

Just as you made these current habits slowly you can start to make new ones the same way.

Related: Is your family protected in an emergency? Click to find out How to Make an Emergency Binder

Are you looking for better money habits?

If you are wanting to get started on some better money habits I would strongly suggest you sign up for our Free Money Saving Action Steps.

It’s a once a week email that gives you a small action that can help you put more money back into your wallet.

Think you could spend less?  Check out this article on Gateway Spending

Did you find this idea useful? it would help us out if you shared it.

Get Our Best Tips On Saving Money

Sent To You Once A Week.

So You Can Take Action!

Get our weekly email with our best ideas for saving money.

Success! Now check your email to confirm your subscription.

1 shares
This post may contain affiliate links which go towards keeping this site running. Please see our Disclaimer and Privacy Policy for more. We are a member in the Amazon Affiliate Program. Thank you for your support!