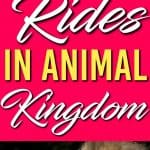 Disney World’s Animal Kingdom in Orlando always gets dismissed as the one Disney theme park you could pass up on. But dig a little deeper and this park is the favourite of many first time Disney visitors. In fact the top fast pass rides in Animal Kingdom have the longest waits out of all the rides in the park.

In fact we loved it so much, that when we extended our park passes to a 10 day pass, the kids first pick was Animal Kingdom. The Animal Kingdom rides were  just THAT GOOD!

But with that comes a problem.

Some Disney rides can have looooong lines from first thing in the morning until close. If you aren’t careful you could spend hours in line everyday.

You need a plan!

If you have checked out our Disney Fastpass Secrets, a strategy to optimize your Disney FastPasses, you know there are things that you can do to get the most out of your Disney World experience.

Here are the Fast Pass rides at Walt Disney World’s Animal Kingdom  (note that this refers to your first 3 passes and not the ones you get after like we talked about in the FastPass secrets) and how you should plan your day around the other rides to ensure a great time!

First the basics. If you haven’t been to Disney World before here are the essentials you need to know for Animal Kingdom. We go into full detail in our Disney World FastPass strategy.  Here’s the bottom line:

FastPasses Save Time and Are Amazing When Used Right

With the arrival of Pandora, Animal Kingdom has introduced a two-tiered system for the park (much like they have in Epcot, see our Epcot FastPass article for more).

The ride that should be your focus is Flight of Passage. You will be talking about this ride months later! If you are lucky enough to get your FastPass for this ride, what I suggest is doing what we did and get to the park for rope drop (or if you are on resort early magic hours) and head over to Na’vi River Journey.

We did this and walked straight on first thing in the morning. While it’s good to see both, Flight of Passage is the best ride in all of Disney World. 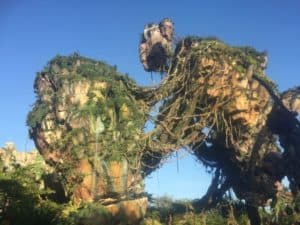 Pandora is one of the newest additions to the Animal Kingdom.

There are 2 main ride attractions Flight of Passage (crazy and amazing, can’t say enough things about it) and Na’vi River Journey (very cool). The whole area is right out of Pandora from the movie Avatar.

Somehow Disney has managed to do something incredible with the floating stones. You could stare in wild wonder at the sights alone in this part of the park.

Which is good because the wait times for the two rides are long.

As in really, really long. Like we got into the park at 8 am with everyone else for Magic Hours (a privilege for people staying at Disney World resorts) and the wait was still 150 minutes at open!

That’s right it was 2 and half hours of waiting right at opening. Then it gets longer as the park fills up.

But here’s the thing…  one ride was worth the wait to do it.

As we mentioned earlier this ride should be your priority. Flight of Passage blows everything else in Disney World away. The only thing that comes close to it is Soarin’ (one of the Epcot rides) and even then it’s a distant second.

This ride had lineups of over 3 hours at some points in the day.

Getting a FastPass for this one is key to making the most of a day at Animal Kingdom.

Most asked question: “Do I Need to Have Seen Avatar Before I Go On The Rides”?

My kids (7 and 9 at the time) hadn’t seen the movie and they were just as taken with it as we were. If this there is one thing I have taken as a sure fact it’s that you don’t need to know the movie to appreciate the rides in the theme parks.

That goes for any of the rides in all of the parks.

This is a magical boat ride in the world of Avatar. It’s new and has a lot of long lines typically. Not a thrill ride, but for the Avatar lovers out there it’s a must. 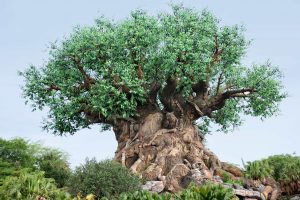 We will dive into these, but we never needed a Fastpass for any of the shows in Animal Kingdom in the end of August.

This is a good one to hit early in the day or later on in the evening so the animals are more active. It gets pretty busy so booking a Fast Pass is a good idea.

This is the feature roller coaster in the park. It’s got a steep climb and is pretty intense for the young ones.

Yet my youngest couldn’t get enough of it. You can and should FastPass this.

On occasion, it does have shorter lines first thing in the morning, but the line ups can be over an hour at peak mid day times. The other option to get around this would be to use the Magic Hours but those only apply if you are staying at a Walt Disney Resort.

This is another big time suck without a Fast Pass. It’s a lot of fun and you don’t want to miss it.

The best thing you can do is book this at a time that makes sense. You will get wet.

I had a hose blast me for 10 straight seconds while the rest of my boat laughed at my wetness.

Before you go to the park bring a poncho and a water proof bag for your electronics.

This is a thrill ride back in time. It’s a cool trip, but you can get Fast Passes for this later on in the day (meaning after you have used your first 3 in the morning).

We did this a couple of times for this ride.

This wasn’t part of our initial Fast Pass strategy, but we did love this ride.

This is more of a midway ride. Something you would see at a local roller coaster. But it still can get line ups for as long as 40 minutes. So if you have really young ones it could be on your initial Fast Pass list.

Though it was pretty easy when we went to get them later on in the day.

Thinking Epcot Fastpass or Magic Kingdom? Here is the full list of Epcot Rides and the complete list of Magic Kingdom rides

Now that you know all the rides here is what I recommend doing.

Tier 2 should be Kilimanjaro Safaris (if you can book it early morning so the animals are more active) and Expedition Everest (provided you love rollercoasters). If you don’t you can always book Kali River Rapids, just be prepared to get wet.

On your Day at Animal Kingdom

Get there for rope drop (even better if you can do the early magic hour), and head straight toNa’vi River Journey. From there I would go to which ever of the rides are most important to you. If you didn’t book Kilimanjaro Safaris head there first.

Love rollercoasters? Then get to Expedition Everest (we rode it 3 times during the morning magic hour).

From there you can visit the other rides, you will want to go to as many of them as possible in the morning as the park fills up through out the day.

Once your initial 3 FastPasses are used

As soon as you scan your wrist band on your last ride you can book another FastPass. Use the time in line to jump on the My Disney World App and look for another ride you can book. We managed to to Dinosaur a few times, as well as some of the other less busy rides.

Keep booking one ride at a time. As soon as you scan in you can book the next one. It’s the best way to try and see everything.

Use the Shows for the Middle of the Day

During the milddle of the day it can get pretty hot, that’s the time when it’s good to go see shows (or take a midday break, I know it sounds counter intuitive, but it’s worth it if you are wanting to stay for the light show). The shows are air conditioned and definitely worth it.

If you are looking for a great resource for your Disney trip? Pick up a copy of The Unofficial Guide To Walt Disney World  It’s what we used and well worth the price to save you time and get all your questions answered.

Here are the FastPass rides that are worth getting at Animal Kingdom.

Find this useful? We would love it if you spread the word by sharing it!

394 shares
This post may contain affiliate links which go towards keeping this site running. Please see our Disclaimer and Privacy Policy for more. We are a member in the Amazon Affiliate Program. Thank you for your support!