Disney World’s Epcot is an amazing theme park that often gets dismissed for the other Disney World theme parks.  Epcot (which stands for Experimental Prototype Community of Tomorow) is broken up into two main sections, the Future World and the World Showcase. The majority of the rides are going to be found when you enter the park into Future World, but there are a few other rides amongst the different pavilions that make the list.

In this post we will dive deep into Epcot FastPass+ and how to successfully navigate your choices so you can make the most of your day in Disney World’s Epcot Park.

Unlike the other parks, Epcot has a two-tiered system. Instead of the single tier of Fastpass+ (like they have with Magic Kingdom rides ) , there are 2 tiers of Fast Pass rides in Epcot.

There are 5 rides in the Tier 1, and 7 rides in Tier 2. Your initial FastPass + bookings will only allow you to book one Tier 1 attraction, and two Tier 2 attraction.

This is where things can get a little complicated.

But don’t worry, we will break it all down for you, so you are good to go come time to book your FastPasses at Epcot.

When to Book Your Epcot FastPasses

This is something everyone confuses, so let’s clear the air.

If you are staying at a Disney World resort you will be able to book your Epcot FastPasses+ 60 days before the day you check in to your hotel. This can be tricky, because it’s not 2 months, it’s exactly 60 days. Also if you are arriving late that day it’s still 60 days from the time you arrive at your hotel, not your first day in a park.

If you are staying at a non-Disney World resort, then you will be able to book your Epcot FastPasses 30 days before your first day at the park. You can book all of your FastPasses in Epcot via the My Disney Experience App or through their website or have your travel agent book your rides for you.

There are 5 rides that are part of the Tier 1 rides.

Which Tier 1 Rides Should You FastPass at Epcot?

Out of the 5 Tier 1 FastPass rides there are 3 that deserve your attention.

Honestly I thought I was done with Frozen but the one thing Disney does with it’s new rides is hit them out of the park. Frozen Ever After is no exception.

I got off Frozen and could have gone right back onto it, had it not been for the 70 minute wait. This one is worth the FastPass. One other note is that Frozen did shut down a few times when we were there. So it’s probably worth booking this as early as possible. But that’s all a part of our FastPass strategy.

You get to design your own car and see how it performs on the track. This ride boasts speeds of 60 mph so if you aren’t a fan of going fast, you’ve been warned.

This ride is amazing! You must book this ride.

It’s a flight around the world over some of the coolest places. Honestly I could have done this ride a dozen times in a row and not gotten bored. We came back to the park and made this a priority.

While Epcot doesn’t have the same amount of rides, Soarin’ makes up for it.

The other two Tier 1 attractions, Character Meet Up and Illuminations will depend on your family.

If they are really big on meeting the characters then you may want to book this. Personally, we waited in line for it. It’s indoors and you get out of the heat for a while, plus with the My Disney Experience App, you can check for a time when the line up is low.

Illuminations is the night time light and fireworks display, it’s very cool to see, but there are many places around the World Showcase Lagoon to see it from. I would only book this if having a great seat is on the top of your list.

One other thing about using Illuminations as your one Epcot Tier 1 FastPass+ reservation, this takes place at the end of the day, so you will be unable to book any other FastPasses at Epcot throughout the day.

That in itself was a deal breaker for us. Especially when you have been in the sun all day, there is no guarrantee you are going to last until the fireworkds. Just my two cents on having done it a few times.

Which Tier 1 Ride Should You Book at Epcot?

This is a tricky answer. If you can get there early I would book Frozen Ever After. Here’s why.

Frozen is newer and because it’s a water ride it can have more troubles than non-water rides.

By booking Frozen, you can set yourself to get there for rope drop (a.k.a. opening) and rush to Test Track. If you get there early your wait times will likely be the shortest they are for Test Track the whole day (it’s VERY popular).

Then I would fly over to Soarin’ and get that one under your belt quickly, because you may want to go back later on if you can.

Of course if you don’t like Frozen, or you are just ready to let it go (sorry bad joke, had to do it), then I would book Soarin’ and still get there for opening and rush to Test Track.

Soarin’ is the one you don’t want to miss, but if you get there early you can arrange your schedule to not miss it. Also Disney World has added to Soarin’ so it can take on more people, but it’s up to you if you want to risk it.

What Are The Epcot Fast Pass Tier 2

There are several other FastPass rides, you will be able to book two of these initially, and from there you can book one at a time extra after all three of your initial FastPasses are used up. The Tier 2 FastPasses are:

You can read our article on Epcot Rides for more information.

Which Tier 2 Rides Should You Book at Epcot?

The biggest of the thrill rides in Tier 2 is Mission Space. You can book this one pretty easily for either the hour after park opens (leaving you enough time to do Test Track), or for later in the day if you don’t want to cut it close.

This one is pretty easy to get into with an extra Fast Pass throughout the day, but if you want to get something booked, this can do it.

The Seas with Nemo & Friends

Our kids loved this ride, you get to travel under the sea and look for Nemo, it’s a lot of fun for all ages. Though the younger kids will get the most out of it.

After your Initial FastPasses You Can Book other FastPasses

Once your three passes are used up, you can start to look for and book any other rides you can find.

We were able to book about 3-6 extra FastPasses when we went at the  end of August, so it will depend on the time of year that you go.

But know that as soon as you scan into your last FastPass, you can start to book the next one for immedaitely after the ride you are going into.

Personally I would recommend the following:

I really enjoyed this one, and it caught me off guard. It’s a boat ride through a section that shows you about agricultural things that they are doing in Disney World, including the food that you eat in restaurants.

This is an interactive show that will impress you how far these shows have come. We did it multiple times because it changes with the crowd. Plus it’s out of the sun, which is really nice in the middle of the day.

Once you are in the park that day and you use up your first 3 FastPasses+ you can book additional ones subject to availability, so try and book your passes for as early as possible so you can maximize your extra Epcot FastPass+ rides.

The best strategy for a one day book Frozen one day an Soarin’ the other. Then get to the park first thing and line up for Test Track. But if you are only in Epcot for one day here is what I recommend.

Book the ride you want to do the most in the Tier 1 group as early as possible.

So if you really want to see Frozen, book it, if you would rather see Soarin’ (which is my #1 Epcot FastPass ride recommendation) book that.

Your Day at Epcot

Focus on the Tier 1 Rides first.

Get there early. You will want to be there for rope drop.

The first thing you will want to do is get to Test Track. The lines are lowest in the morning, depending on the time of year you can get in within 45 minutes of rope drop.

From there you can head over to Soarin’ and get that one done if you haven’t booked it yet.

That way you will get to see all 3 of the main FastPass+ Tier 2 rides (this assumes you booked Frozen Ever After).

Once you have see Soarin’ and Test Track, head over to your first pre-booked FastPass+ ride, and finish up your initial 3 rides that you booked.

After you are done with your initial 3 rides you can book one at a time for your group depending on ride availability that day. This is the core of a good FastPass+ strategy. You use up your initial bookings quickly so you can take advantage of all the other rides afterways.

We did this both times we went to Epcot and we essentially had a FastPass for every ride at Epcot. It was amazing.

Thinking Epcot? Here is our Epcot One Day Plan, and the full list of Epcot Rides.

Disney Water Parks: Tips you should know for Blizzard Beach and Typhoon Lagoon

16 Things You Should Buy Before You Go TO Disney World 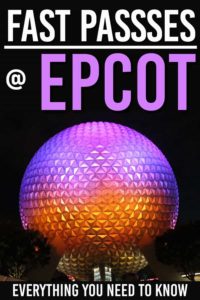 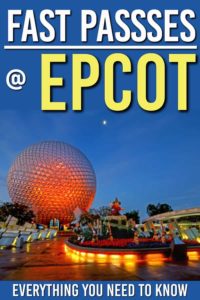 302 shares
This post may contain affiliate links which go towards keeping this site running. Please see our Disclaimer and Privacy Policy for more. We are a member in the Amazon Affiliate Program. Thank you for your support!